Neah Lee - Without Wax CD
Photography, CD Packaging, Web Design
I met the very talented, Neah Lee through a mutual friend back in 2003. He was working with her on her first collection of songs and asked if I could take some photos. I had recently graduated from FIT and love music, so I was very excited to work on this project and meet Neah. It was a cold, rainy day but we managed to get some good shots in the studio and on the inspiring streets of Manhattan. During our shoot it became clear to me that Neah and I had some sort of artistic connection. A few months later I created her website for her first CD release. I still remember the phone call I received from her when we launched it. I had produced a flash intro which featured one of her tracks. It was something quote simple, but also lovely, fitting and true to her. She hadn't seen everything I designed yet, but we needed to launch the site asap and she trusted my work. The site went live in the wee hours of the morning (or very late at night depending on how you look at it) and she called me early that morning. I heard such gratitude and moving surprise as she thanked me whole heartedly. It gave me a euphoric sense of delight... and after the all-nighter I was relieved. =) We stayed in touch after that as she continued to pursue her music and religious calling.

In 2004, Neah had recorded her 2nd CD, Without Wax, and got in touch with me to see if I would do her photography, CD and web design. Of course I would! She was studying at Princeton at the time and we set a date for a photo shoot in the fall. We went around campus and to a charming, nearby park on a beautiful, sunny day. Working with my trusty Minolta film camera, we took a variety of shots with different objects and scenery. Something about Neah radiates through the lens and her voice and song writing are truly inspiring. I used to joke with myself that no matter your faith or non faith, while listening to her music (about spirituality and Christianity) you WILL believe. Her music and talent are just that good.

We met once the photos were developed to look through them, choose our favorites and come up with some ideas for the CD cover. My initial concepts were focused on jewel tones and included her profile portraits. But...it turns out, as it happens sometimes, these were not the feel she was looking for. She expressed that she loved the idea of using black and white photography with color accents and was especially drawn to the photo of her behind the parking meter. So back to work I went to create a new set of mock ups. Once the cover was chosen the rest of the design fell into place. We used various photographs from our session throughout the booklet - keeping them in black and white with some neonish accents. I was touched when I found a surprise while laying out the text for the interior tray card. It was a list of thank you's and she included a note to me with a lovely message. 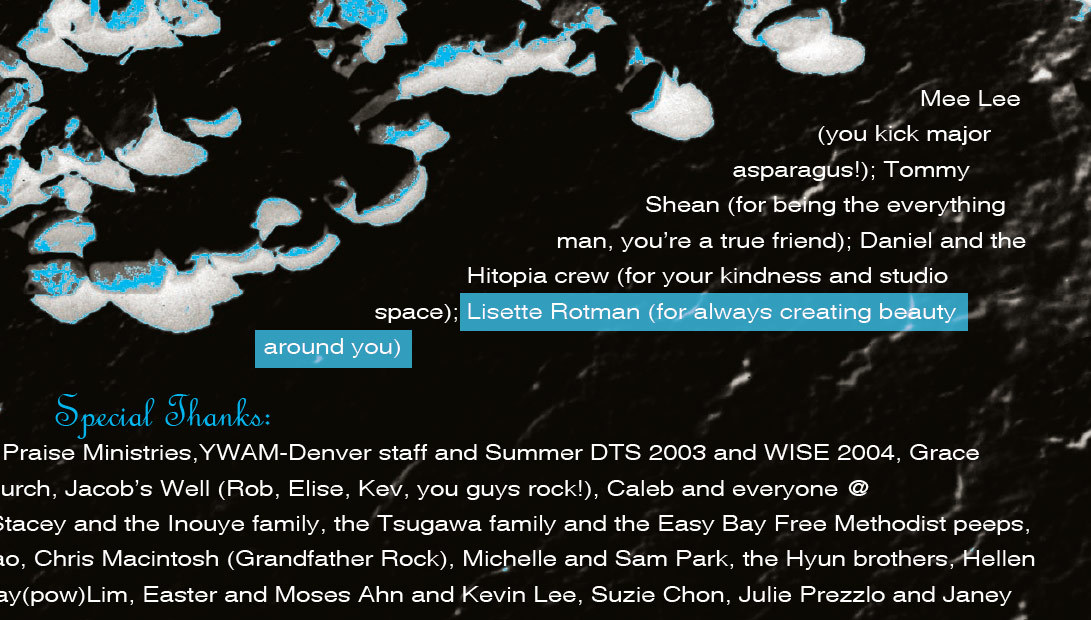 I don't know if what she said is true, or if it was our artistic connection that made it so, but there was that euphoric sense of delight again.

This is still one of the projects I am most proud of and the photos and designs I created continue to be some of my favorites.